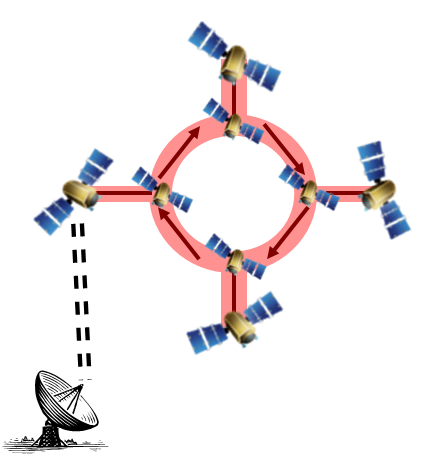 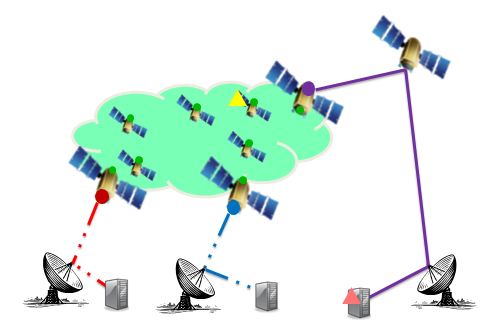 F6 modules (satellites with green dots) are part of a single L2 subnet, configured by TA2 components. This includes modules for persistent downlinks (also has a purple dot) or intermittent direct downlinks (red and blue dots). 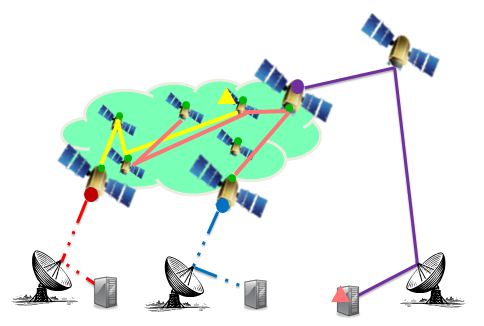 Overlays are managed by Overlay Managers (triangles), either in space (yellow) or on the ground (pink).

An overlay connects components in space via tunnels (yellow links; pink links). Some modules can be part of more than one overlay at the same time.

The underlying distributed software system is based on two APIs:

Login as root, then do the following (this documents the current development environment; the final package will install in a single integrated action): 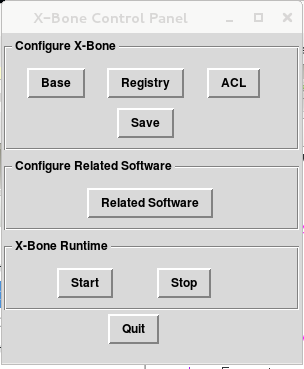 Users are added by augmenting the database of certified users with their associated resource access permissions, as with any MILS system. 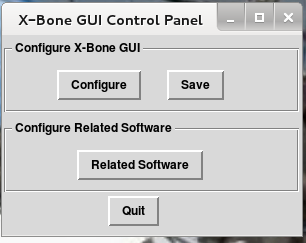 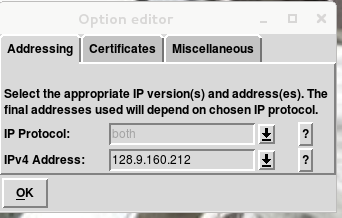 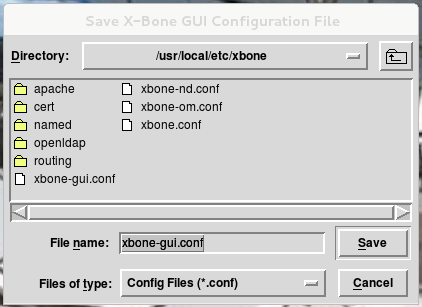 Used for convenience for access to overlay nodes by name.

Delegates address blocks; may not be needed for IPv6-only operation.

Missions are deployed using a graphical user interface OR a command language API directly, and occur in two major phases:

The overall protocol is shown below, as messages initiate at the graphical user interface (GUI – or directly from a programmatic API), and are sent to the Overlay Manager (OM), and subsequently to each of a number of Resource Demons (RDs).

The second phase itself is a two-phase commit protocol that supports recursion, shown below:

We group resources into the following categories:

Each resource may have the following properties:

For each of these resources and properties, we try to use existing mechanisms for resource management where possible. Most conventional components are easily modeled as resources; cameras and sensors may be more challenging because their control and data channels need to be managed together. Much of our expectation for handling sensors is based on file-mapped devices, i.e., where the control channel and data channel are available as virtual files in the file system.

We expect that a single component can be shared when it either concurrently or serially exists as an interface or file in different missions. For cameras, this means shared access to the virtual file descriptor of the control and data channel. Other sharing, as when packets on the interfaces of separate miissions share a crosslink or downlink interface, happen by an explicit resource sharing mechansm (for networking, this is AQM with RSVP).

Intermittent file transfers are already supported by FTP, HTTP within a single file, and via rsync across multiple files. This is more than sufficient for the 1-3x/day 15-20 min duration link operation expected for LEO downlinks.

There are a variety of distributed fault-tolerant file systems, of which we are currently exploring MooseFS. A key concern is the interaction between such a file system and the MLS protection mechanisms; it may be necessary to implement one such file system service for each MLS security domain separately.

We assume that there are two types of ground links for an F6 cluster:

We expect that each such link is part of an IP router which is a member of the F6 cluster, i.e., a node with another interface on the F6 wireless network.

The result of these assumptions is that we assume a persistent control channel over which management commands, including liveness (heartbeats) operate. We also expect that the high-capacity direct downlinks can use conventional pause-resume protocols (FTP, HTTP) for data transfer, using existing TCP (which may be modified with a larger initial window, or high-speed variants).

Our approach uses existing IPsec and IP headers, together with two layers of IP-in-IP tunnel.

App-app packets of 100 bytes will already have 78% additional overhead due to the L2/IP/TCP headers, i.e., only 56% efficiency
Our approach adds an IPsec header (52 bytes, which varies slightly depending on algorithm), and between 2 and 4 additional IP headers, i.e., an uncompressed additional 132-212 bytes, resulting in an overall packet size of 310-390 bytes.

100 bytes of user data -> 178 bytes as a network packet -> 310-390 bytes over DynaSat, i.e., 25-30% efficiency
The expected required L2 data capacity for 100 messages/sec of 100 bytes payload each is thus approximately 250-312 Kbps — to support a user payload capacity of 80 Kbps (i.e., around 25-30% efficiency). The overhead remains the same for larger packets, so the efficiency increases as payload size increases. Further, the overhead could decrease with minimal compression, e.g., even using IPv4 headers for the overlay system would result in no additional CPU effort for compression/expansion and no storage for conversion tables but the total bandwidth reduces to 216-280 Kbps and the efficiency increases by around 5%.

Further compression (e.g., ROHC) could achieve even higher efficiencies, compressing not only our headers but also the original TCP/IP headers.The number of intermediate nodes does not affect these numbers, and they are preliminary.

Simple IPsec would add around 52 bytes (depending on algorithm) to a base packet, and typically operate in tunnel mode (adding another 40 bytes for IPv6), so the overall additional overhead for a simple secure network would be 92 bytes on top of 178, for a total of 270. DynaSat adds only 1-3 additional IPv6 headers, i.e., another 40-120 bytes, resulting in a relative efficiency of 70-85%.

Our approach does not modify the kernel OS packet handling mechanisms. Each packet traverses the kernel at least two times, however, so the maximum packet rate is reduced by a factor of around 2. At

Overlays currently take around 12 seconds to create, with an additional 2 seconds when IPsec is included. Much of this time is consumed in configurable timeouts, e.g., waiting for all available nodes to respond to an overlay advertisement.

The current base code is 31,000 lines of Perl, of which 14,000 are part of custom recursive-descent parsers (much of which disappears when the language is fully XML). Tihs code currently supports 3 different operating systems – FreeBSD, Linux, and Cisco (via a buddy host).

The X-Bone assumes an achitecture with one Resource Deamon per physical node, and one primary Overlay Manager per overlay. This means that a given overlay has only one primary OM, and that an RD may be configured by multiple OMs at the same time.

Our assumptions model overlays as if they were files, where a single file resides in only one security domain, and cross-domain information sharing occurs only through guard applications.

When OM and RD processes are instantiated and could perform write-down operations or instantiate a guard process to perform that, they are configured with membership in particular security levels.

Because an RD manages resources for a host, it normally participates in the multiple security levels defined for its host.  RDs therefore can potentially act as guards.  As stated above, they are restricted to host resource management functions and do NOT send or receive data-plane packets.

DYNASAT configures name resolution in overlays such that locally defined name associations are not accessible outside the overlay.

DYNASAT creates overlay networks (VPNs) for each distributed application. These overlays are described and defined via DYNASAT configuration and control protocols that are based upon existing XBONE protocols.  Most DYNASAT overlay resides exclusively within one security level (compartment). Once an overlay is established, payload data sent across it is protected by IPsec encryption (at this time Suite B encryption is assumed).  Traffic may only move to a lower security level by means of a trusted guard process that is simultaneously a member of (resides on) both the higher and lower security level overlays.

The TCSEC definition for a covert channel is a means to circumvent a properly configured and functioning security system by the ability to transfer information from a higher compartment of security to one of lower security.  Covert channels are distinct from network steganography techniques.

DYNASAT relies upon standard techniques that are presumed implemented by the physical and data link layer provider.  This includes the COMSEC features: TRANSEC and traffic-flow security.  The presence of valid messages on F6 communications links is assumed to be obscured by whatever encryption technology is employed.  Packets are therefore considered opaque below the network layer.

Timing channels are difficult to initiate in a distributed system if a synchronized clock is not available.  DYNASAT does not utilize a synchronized clock.  A covert timing  channel must pass its information across levels within a host.  Within the confines of real-time scheduling demands, it is assumed that scheduling jitter is used by the seperation kernel to further complicate the operation of a timing channel.

What remains to be considered are other potential cross-level information flows.  The potential for creation of covert channels by DYNASAT relate to patterns of execution and state storage caused by overlay creation, overlay monitoring or overlay destruction.

There are three basic entities in the DYNASAT system, users, OMs and RDs. As stated above, these all reside in the same security level.  The creation and destruction of overlays modifies the following virtual-machine system state: interface tables, routing tables and IPsec key association tables. As stated earlier, the interface, routing and IPsec tables are local to the virtual machine.

Choosing configurations for an F6 element among a blizzard of alternatives requires a lot of design parameters. TA1 is going to need a great deal of design alternatives data from TA3 eventually. From TA3 those would be items such as motherboard configuration parameters, imposed application limitations, chassis requirements and so forth.

It seems to be a good idea to start this ball rolling now, so that TA1 can take a peek at some of the objects and properties they may need to deal with.

Along those lines we summarize one motherboard and chassis configuration.  These are drawn from publicly accessible documents.  No doubt  some of this is incorrect.  Also, the categorization that we suggest below via names and indent levels is merely a ‘for instance’ and to be taken as indication only. The interface description may need further augmentation.

Quite obviously, there will be other meaningful bounds, such as OS memory consumption, available memory for applications and application memory requirements.  Those are currently unknown.

We assume a Layer 2 that provides similar capabilities to a conventional ethernet LAN: 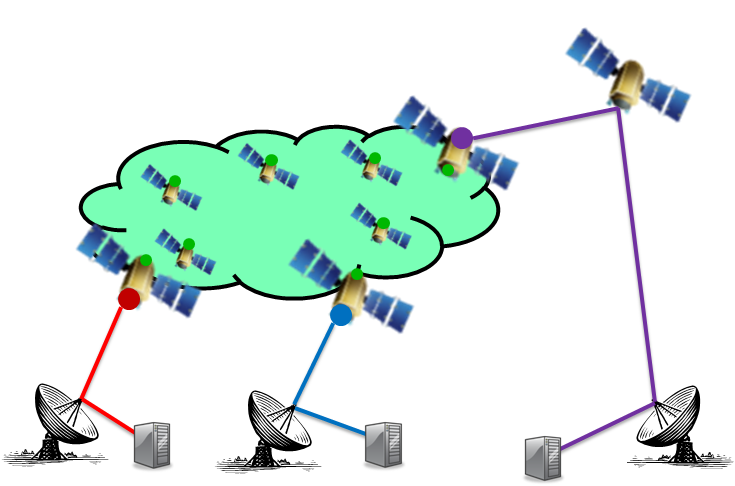 This image shows the F6 cluster components as each having a single TA2 interface (green), where the green subnet is the single LAN-like F6 subnet.

The figure also shows at least one node has a link relayed through a geosynchronous satellite (shown in purple, i.e., Inmarsat), and there can also be nodes in the cluster that have direct ground links (shown in red and blue). The geosyn link is always up, and the ground links are up approximately 20 minutes at a time, 2-3x per day.

Note that most of these requirements are consistent with basic assumptions of efficient L2 support for Internet L3 (RFC 3819).

The result treats the entire F6 cluster as a single Internet subnet. Solutions for intra-subnet forwarding should be addressed at L2, as is common throughout the Internet, to avoid L2/L3 forwarding interactions. This is important because L3 assumes that a link is either point-to-point or shared, and its routing protocols are not efficient when these are mixed within a subnet (or when a link has varying properties).

We currently assume that cluster flight has modest requirements and impact on the overall network architecture as follows:

We anticipate that the cluster flight software will run as follows:

In summary, we do not anticipate the need for F6 to run hard realtime flight operations in the shared user multiprocessing environment; instead, we expect it to function as an advisor to a separate on-board hard-realtime flight controller via a protected internal channel. The communications requirements for cluster flight appear to be supported sufficienty by any common data broadcast mechanism, e.g., RSS.

The X-Bone is an Internet overlay system that includes both:

Tethernet is an Internet subnet rental system based on X-Bone that removes the effect of NATs, and thus allows full Internet access even where it is not locally supported.

NetStation is a distributed computer architecture based on replacing the backplane of a computer with a high-speed network.